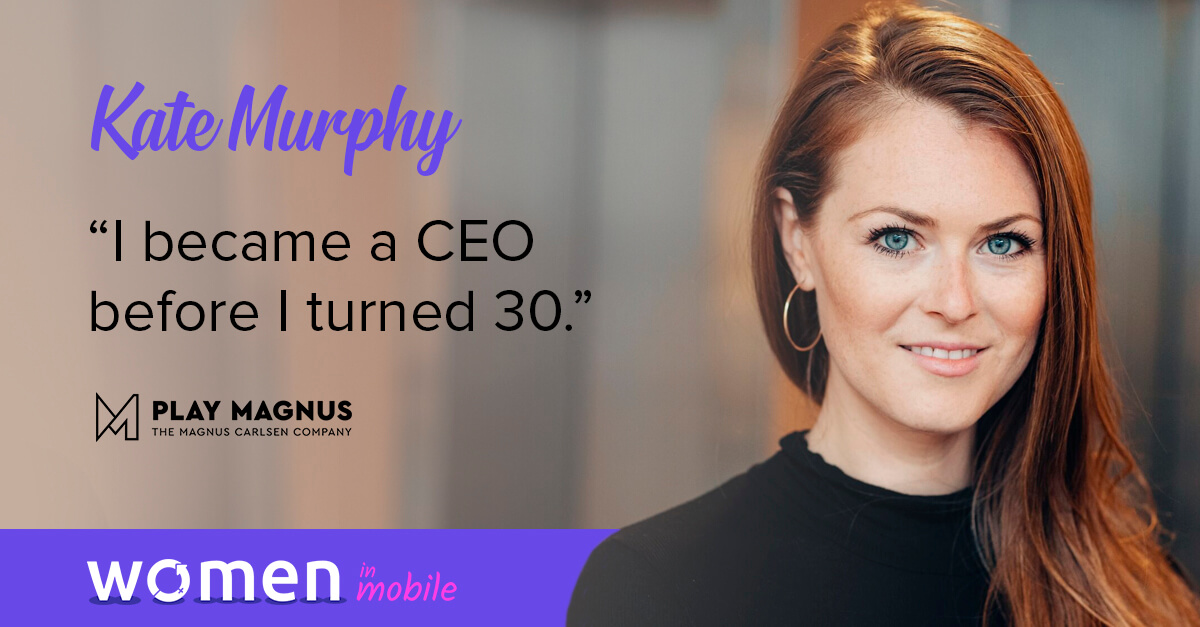 This article is part of Liftoff’s Women in Mobile series in partnership with mBolden, a non-profit organization dedicated to helping women get connected, stay inspired and become empowered through content and events.

By day, Kate Murphy is the CEO of Play Magnus, working with Magnus Carlsen, the current World Chess Champion, on a chess app enjoyed by over 350,000 monthly active users globally. By night, she is a yoga and wellness influencer with nearly 50,000 followers on Instagram (@livingprettynaturally). As part of our “Women in Mobile” series, we interviewed Kate to learn why women shouldn’t be afraid to be feminine and authentic at work.

How did you you become a CEO at such a young age?

Entrepreneurship has been my passion since I was 12, when I started a candle company. The business didn’t take off, but the experience helped me realize very early on that I wanted to be my own boss. At the age of 23, I co-founded iDance Convention, Canada’s national dance convention, and ran the business for four years. I then fell in love with a Norwegian and moved to Oslo, Norway. For a while, I made a living consulting. One of my contacts was Magnus Carlsen’s manager. Magnus is a Norwegian chess grandmaster and the current World Chess Champion. After completing my consulting job with him, they offered me a full-time opportunity at his company as CEO. I took it.

At first, I was skeptical about creating a business around chess. But when I researched the market and learned that 600 million adults play chess globally every year and the sport could have a massive impact chess on young people’s developing minds, I was in. Mobile seemed like the most relevant channel to reach such a massive and young audience. And so we built our first chess app for iOS and Android. We thought the app would be a small part of a much larger business vision, but it started to gain momentum. Play Magnus now has over 5 million installs and we just announced our merger with chess24.

How has your background helped you become successful?

While I have both a BBA and an MBA, my drive and willingness to take risks help me the most. Because of it, I lived in different countries, started my own business, and found that the best way to learn is by doing.

What has been your most career-defining moment?

In my first year at Play Magnus, I was interviewed by the Wall Street Journal. The article got picked up by several top-tier publications. That kind of exposure was career-defining because it showed me that people cared about our business and the impact we were making.

What challenges have you faced in the industry traditionally dominated by men?

It’s impressive how Norway has implemented so many amazing initiatives to promote gender equality in large, publicly traded companies. But when it comes to tech startups, most companies are still dominated by men, as they are around the rest of the world. I believe men and women bring unique ideas, skills and perspectives based on their background, which is why it’s so important to have balance in the boardroom. I have found that authenticity and resoluteness are two of the most important mindsets for women to embody to make their mark in business, and they are traits I try to bring to my role as CEO.

What do you see as some of the best and worst initiatives designed to promote women in tech?

The problem with women’s initiatives is that they often tend to single women out. It could be in the name of a conference, such as the “SHE Conference” in Norway, or even the idea of “girl boss.” In my opinion, we should just get rid of the “girl” part and simply call her a “boss.” A popular tech conference recently offered discounted tickets for women. It’s a great initiative, but I wish companies and organizations did more to include women instead of treating them differently. As a society, we must work on inclusion so that girls don’t find it scary to study science, take up coding and feel part of the community. It shouldn’t feel like we are doing something “extraordinary” or “different,” it should be normal to take part in this industry.

Who is your biggest career inspiration in the industry?

I admire Arianna Huffington for her leadership style, authenticity and ideas around work-life balance. Personally, I found it challenging at first to embrace my femininity as a woman leader in tech. For a while, I didn’t tell my team I practiced yoga, wellness and spirituality because I was afraid that would affect the way they perceived me. As I grew more in my role though, I became more open about who I am as a person. I now teach yoga to my entire team and at our shared office building. By being authentic, I want to build trust and also encourage everyone on my team to feel comfortable being themselves at work.

Learn more about Women in Mobile.