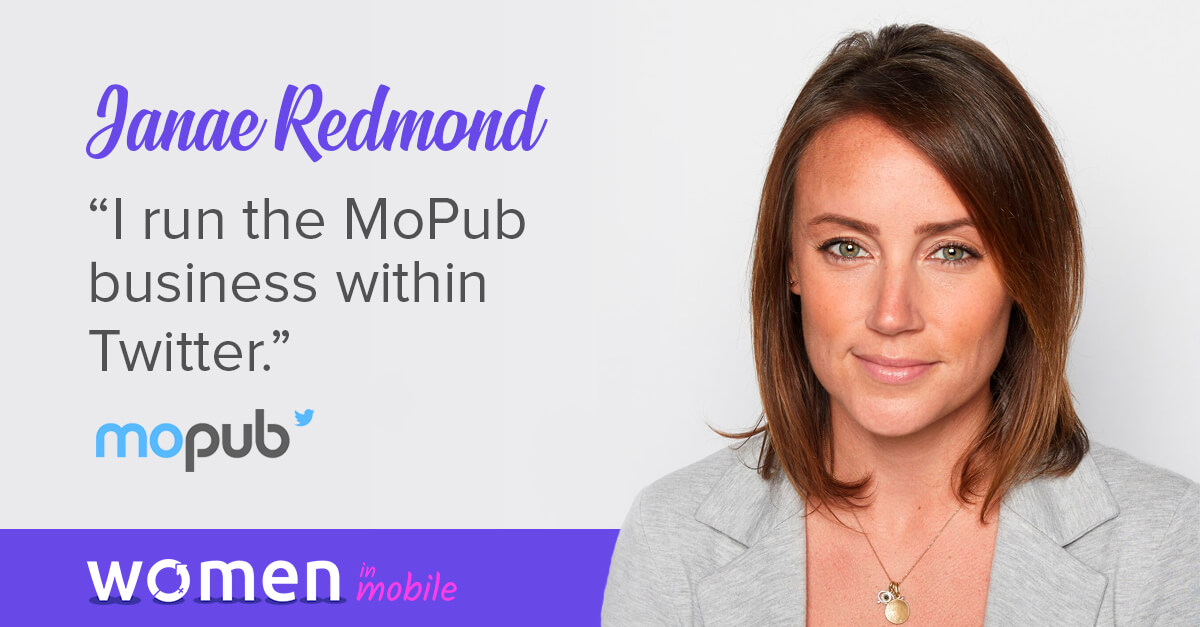 This article is part of Liftoff’s Women in Mobile series in partnership with mBolden, a non-profit organization dedicated to helping women get connected, stay inspired and become empowered through content and events.

In a world where venture-backed startups risk a 90% chance of failure, Twitter’s Janae Redmond had a front-row seat as two adtech companies — Admeld (acquired by Google) and MoPub (now part of Twitter) — became the rare success stories. And against all odds, in both companies, she was also among the few female executives in Silicon Valley tasked with the most critical success metric for any business — revenue.

Now VP of MoPub at Twitter, Janae manages the MoPub commercial team globally. In this interview, Janae discusses how new managers must learn to be a coach, not a player, and what it takes to become a female executive in technology.

How did you decide to pursue a career in mobile?

When I graduated college, mobile was a nascent industry. But I had a degree in marketing, so I started out my career in TV sales and then transitioned to digital advertising. A colleague from Time Inc. introduced me to the then-VP of Mobile at AdMeld, and I became AdMeld’s first sales executive. I was lucky to find a “mobile champion” who was willing to take a chance on hiring me despite the fact that I had no experience in mobile advertising or ad tech, and gave me the foundational knowledge to build a career in the mobile industry.

How did you grow from a sales person into a VP?

When AdMeld was sold to Google in 2011, I had a choice to make: be comfortable working at Google or go back to the excitement and discomfort of being at a startup. Within a year at Google, it became clear that my passion for building something from the ground up is what drove me.

When I was offered an opportunity to join MoPub, it was still a high-risk startup with just 20 or so people. After meeting with the CEO, Jim Payne, I decided to join and help build a company at the forefront of mobile.

At first I took on a sales role, educating, selling and onboarding DSPs onto the MoPub platform. As my book of business grew and I demonstrated my positive impact, I was given the opportunity to build a team to further scale our growth.

What did you learn from your transition to manager?

My biggest learning as I transitioned into a management role is that, unlike an individual contributor, my focus is on supporting my team. Their success becomes my success. This is often a difficult transition to make and requires practice and patience.

As a new manager, I had to learn how to set expectations for my team. And that required developing strong communication skills, to set goals and articulate my expectations clearly. I also learned that it’s more effective to give my team the creativity and space to figure out how to overcome obstacles instead of telling them what to do.

What challenges have you faced in the industry traditionally dominated by men?

Regardless of the industry, we all have unconscious bias that we place on others based on gender, nationality, race, or religion.

Because of gender bias, women have to work harder. As women, we also have to be deliberate about the words we choose to use. If a woman drops a few curse words in a conversation, many would find it inappropriate. At the same time, people wouldn’t question such behavior if it came from a male colleague.

Gender bias is the reason I am thoughtful about my communication and tone. It’s also why I work on diversity and inclusion at Twitter — so this isn’t something we have to worry so much about in 10, 15, 20 years from now.

What aspects of communication should women be conscious of to be seen as leaders?

Women are often taught from childhood to shy away or display shrinking behavior. Across the industry, the woman’s voice is silenced because she is not speaking up. “Mansplaining” has become a cultural phenomenon because women are thought to not have the “appropriate” tone and can sound less confident than men. Much of it comes down to our historical baggage, education, upbringing, and gender bias.

Even though I have always been confident, thanks to my parents and career in competitive sports, I went through a training on how to enunciate correctly to sound more confident. I grew up in Long Island and used to speak with an upward inflection in my voice, which made me sound like I was asking a question, not making a statement. Presentation courses have helped me weed out the accent.

Who is your biggest career inspiration?

Though she does not work in our industry, my biggest career inspiration is Brené Brown. She’s an author, a researcher, a woman, and a leader who is self-aware. She tackles so many hard challenges that we as humans, not just women, are faced with. Anyone who is transitioning from an individual contributor into a leadership role will be a better people manager by developing a deeper understanding of human motivation.

Is there one piece of advice you wish somebody gave you at the beginning of your career?

It’s not what you know, it’s who you know. Build a strong network.

Of course, that doesn’t mean that your career will accelerate because you know a bunch of people. It’s definitely also what you know. Don’t ever discredit your knowledge or hard work.
Yet building and maintaining a strong network of people who will support you and your career is critical to your continued success. Think of them as your personal advisory board. Understand who your manager is: Are they an advocate? Are they an adversary? Are they someone who can help you succeed? Identify your executive sponsors within your company and surround yourself with people outside who just truly care about your success.

Develop and maintain those relationships early on. At any point in your career, do a self-evaluation: Who’s in my corner? Who is backing me? Know where they stand and how they can support you. It comes naturally to some people. More often though, it will require thoughtfulness and an investment of time.

Fun fact about you that few people know?

I was a gymnast for 10 years. And up until a few weeks ago, few people in my world knew that I can still walk on my hands. During a recent Twitter leadership scavenger hunt offsite, the challenge was to highlight one “weird” talent on our team. So there I was, busting out my best hand walk. I can’t do much else from my gymnastics days. But the hand walk I’ve got down pat.

Connect with Janae Redmond at @JanaeR64.

Learn more about Women in Mobile.